Sarah Turner (featured previously in this post) is a Nottingham based eco designer who has been gaining notoriety for her use of recycled materials to produce intricate lighting designs for interior design projects. 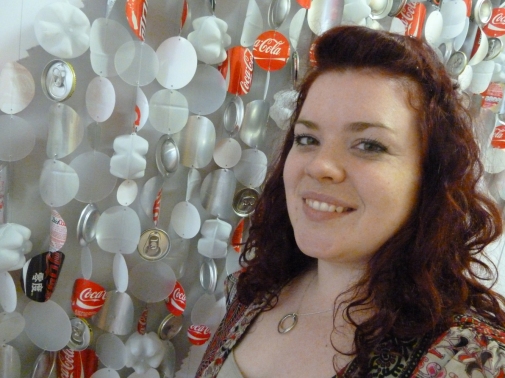 Her latest high profile customer is Coca Cola who commissioned Sarah to make lighting and a massive recycled sculpture for the London 2012 Olympic Games.

Coca Cola first noticed Sarah’s work over a year ago and have been in contact ever since. They decided that Sarah was the right person for the job to design and make the bespoke lighting and sculpture for their Hospitality Centre at the Olympic Park.

Thrilled to be chosen, Sarah said: “When I first started making lights from waste plastic bottles I always hoped that Coca Cola would notice me and my work and get in touch. So being commissioned by them for the Olympics really is a dream come true for me. It feels like a great honour to be working with Coca Cola for this once in a life time event. ”

The lights make quite a statement being two metres wide and are made using 190 plastic Coca Cola bottles each. There are five of the large lights in total, each is made up of rings of the plastic bottles and a globe in the middle. The globe is Sarah’s Cola 30 design which is made from, you guessed it,  30 Coca Cola bottles; each one hand cut and sculpted into decorative forms.

The Cola 30 was the first light Sarah made from waste plastic bottles when she first started her work over four years ago. This was the design Coca Cola first noticed and expressed interest in, after all it is made using their bottles and is named after them!

“I wanted the lights to have an Olympic look to them which is why I chose to make them as circular disks with rings of the plastic bottles, reminiscent of the Olympic rings. I also liked the idea of having the classic looking light bulbs visible, it reminded me of the infamous Coca Cola Christmas truck. I really wanted to include my Cola 30 light, I thought the contrast between the whole plastic bottles and the transformation they go through with the Cola 30 was a fantastic thing to show.” said Sarah

They also commissioned her to make an enormous sculpture nine metres tall made from waste Coca Cola bottles and cans. Thousands of pieces were hand cut then tied onto invisible wires in the form of a diver freeze framed in three different stages of a high dive. When the breeze catches the wires the pieces spin and move adding life and energy to the sculpture.

Sarah said: “I thought that as sport and the Olympics is all about energy, activity and movement, I wanted to somehow portray this in the sculpture. This is when I thought about showing a high diver in different stages of the dive. Diving fascinates me, it’s so precise and graceful yet quick and over in a moment. I thought by capturing and almost freeze framing the dive in its different stages we can look at them in more detail and celebrate them.”

This idea works very well in the space. The diver jumps off the high board on the first floor, turns into a pike through the stairwell and the final stage is the diver entering the water. The final stage is a personal favourite of Sarah’s, just the legs are shown entering the water and a big splash is created. She says: “I think this adds a little humour to the piece as well as intrigue to the guests as they first enter the centre. They will just see the two legs sticking out of the water and will make them want to see the rest of the story”.

The ‘splash’ is made using waste plastic bottles which are then melted to give the bubbly texture and look of water.

Coca Cola  have already commissioned Sarah for more work, she has just finished creating table centre pieces for the Langham Hotel in central London. Coca Cola have taken over this prestigious hotel for their guests to stay in for the duration of the Olympics so hopefully this is just the start of fruitful collaboration!